CELEBRATED THE 87th ACADEMY AWARDS WITH

STAR WATER and LONG SHOT COFFEE offered the non-alcoholic choices. www.starwater.com
Long Shot Coffee specializing in creating high end pop up espresso bars for LA'S finest and most exclusive parties, award shows, movie sets, convention centers and business alike here for any espresso emergency. One of their locations is the West Hollywood Library.
OFFICIAL CHARITY
was HOLLYGROVE and ANDY TRANSPLANT
Hollygrove and its parent organization EMQ FamiliesFirst, have more than 140 years of experience providing mental health and social services for children, foster youth and families in crisis. Formerly the Los Angeles Orphans Home Society, Hollygrove has served as a home away from home for thousands of children who have been impacted by trauma, poverty and hardships. www.hollygrove.org

The Andy Transplant Foundation's, (AGC) objective is to save lives, educate others and to make a difference through charitable fundraising supporting transplant patients, families, future initiatives and research development.

Artist Mario Della Casa  unveiled a one of a kind FREDDIE THE FLUTE, value $250K from the iconic children’s series H.R. Pufinstuf created by Sid and Marty Krofft. Mario Della Casa also unveiled in celebration of the 50th anniversary of the  "DREAM OF JEANNIE" TV series a special bottle that was signed by the nominees and stars attending the RNSH suite. The signed Jeannie Bottle will be auctioned off and all the proceeds will go to Hollygrove. www.jeanniebottles.com


Additional RNSH companies who attended among many:

Maricela David Couture www.mariceladavid.com   featured by Latin Fashion Week  Maricela David is the line that consists of hand crafted gowns. Some are entirely hand beaded, and all developed by free hand. The beading and embroidery is mounted on various silks. Some of the embroideries and beading are on mesh lined with silk. They are designed with built in support on top for a flawless look ,specifically on bare back designs. www.latinfashionweek.com

Kimberly Kimble - kimblebeauty.com - The name Kim Kimble hair-stylist has been synonymous with beauty and glamour for over a decade, and today she continues to raise the bar as one of the most acclaimed celebrity hair gurus in the business. Kimberly Kimble stars on the WE Network show LA Hair. .

Personal Touch Lingerie - www.personaltouchlingerie.com    a Line of Swarovski Crystal Bras and their Nubra.

GT Nutrition -   www.gtnutrition.com/en "We live in a world in which people care more and more about their health and nutrition. With that in mind, GT Nutrition USA as a new company based in the US, comes to the market with a mission of helping not only athletes, but everyone seeking to achieve a healthier lifestyle".
NueLash – www.neulash.com  neuLASH is exclusively formulated with a proprietary combination of pep-tides, vitamins, sodium hydrogenate and pumpkin seed extract to help: fortify lashes against further damage, moisturize to improve lash flexibility and durability, and nourish to help lashes look longer and softer.

Smart Scarf by Fur Frenzy - www.furfrenzy.net  designer/ founder Pam Fischer and her fur frenzy smart scarfs of course her faux fur scarfs and hooded scarfs complete with a place to keep your hands and secret pockets to put your cell phone, and credit cards/id etc.

. Hook Me Ups - hookmeups.com - are a fashionable, stylish solution for charging your smart phones and tech devices on the go!

Shelly Hill of Sparkle Nails was doing manicures and pedicures.

Brynn Cannon Mobile Massage Therapist.- Brynn has lived in both Maui and Las Vegas, the last 15 years. She is a well known massage therapist for poker-players. The Bellagio Spa, Oceanside under a canopy, the CES and MAGIC show, and Mr. Olympia conventions and Poker tournaments are some of the places where Brynn Cannon has worked during her career. (WestHollywoodToday)           February 25th, 2015.                        The Oscars are always a special time for LA's leading sustainable TV-film product placement producer Debbie Durkin, who’s socially-conscious EcoLuxe Lounge  took place on the rooftop of the Beverly Hilton at the  Stardust Penthouse on February 21st. - the day before the Oscars.
The lounge was designed by furniture from Under Canvas, Elan Event Rentals, LBPS Events and Frances Lynn Creative Florals.

Guests enjoyed well-known tunes from DJ Dime, and sipped on champagne and coffee,  while waiting to take a fun photo from Party Life Photo Booth.

Companies who attended:
www.elaneventrentals.com is a eco friendly furniture rental business located in Santa Barbara. Elan Event Rentals is founded by longtime surfer, and world traveler Elan Cohen, who combines his love for art, culture, and style, The style is vintage to rustic, modern to chic. The selections are inspired by the beauty of California's countless venues and landscapes.

The lounge presented vacations to Glacier Park, Yellowstone and tent rentals from The Moab Desert from Under Canvas.

BluBond  presented their own rosewater, and Kenit Rome eye light serum, made in Italy:

"Ikura Formula" is a fluid gel-lotion with Ginkgo Biloba extract for an anti-fatigue action around the delicate eye area.  The trilogy of Hyaluronic Acid, Trehalose and Vitamin E guarantee long-lasting skin elasticity and firmness around the eye area, and.extracts of witch-hazel and Corn Flower gently soothe the area.
*"Ikura Formula" is a special formulation with salmon egg extracts, rich in amino acids, lipids and vitamins A, C and D.
Suitable for all skin  www.kenitcosmetics.com

Posted by Karen Ostlund at 6:10 PM No comments:

Free to the public
10am-5pm
Tuesday-Saturday


The winner of best Oscar costume The Grand Budapest Hotel by costume designer Milena Canonero was announced at the Academy Awards last February 22, 2015.

Neil Patrick Harris was hosting the 87th annual Academy Awards, which was broadcasted live on ABC from the Dolby Theatre in Hollywood.
Jennifer Lopez and Chris Pine presented the award to costume designer Milena Canonero for her work on the Wes Anderson film.
Canonero has previously worked with Anderson on his The Darjeeling Limited and The Life Aquatic, and is a three-time Oscar winner.


It is a documentary in Guatemala,where four friends battle illness, parasites and hunger as they experiment with living on just $1 a day for eight weeks.

The documentary begins with their back-story: middle class upbringings, an academic understanding of poverty alleviation, but no real experience of what daily life is like for people in poverty.
In just two months, they encounter many of the challenges that keep people in poverty: severe illness from contaminated drinking water, steep medical costs, and the impossibility of getting a loan from a traditional bank.

Living On One Dollar (Netflix) is a film that highlights the strength and resilience of people living in poverty, the impact of micro-credit, and the how individuals can have an impact in the fight against poverty. Seeing people from different cultures and circumstances learn from one another will resonate with people who watch the film. Chris helps a boy -who only speaks the local dialect- learn English and Spanish and local women teach their new American friends how to add calories to their diet. 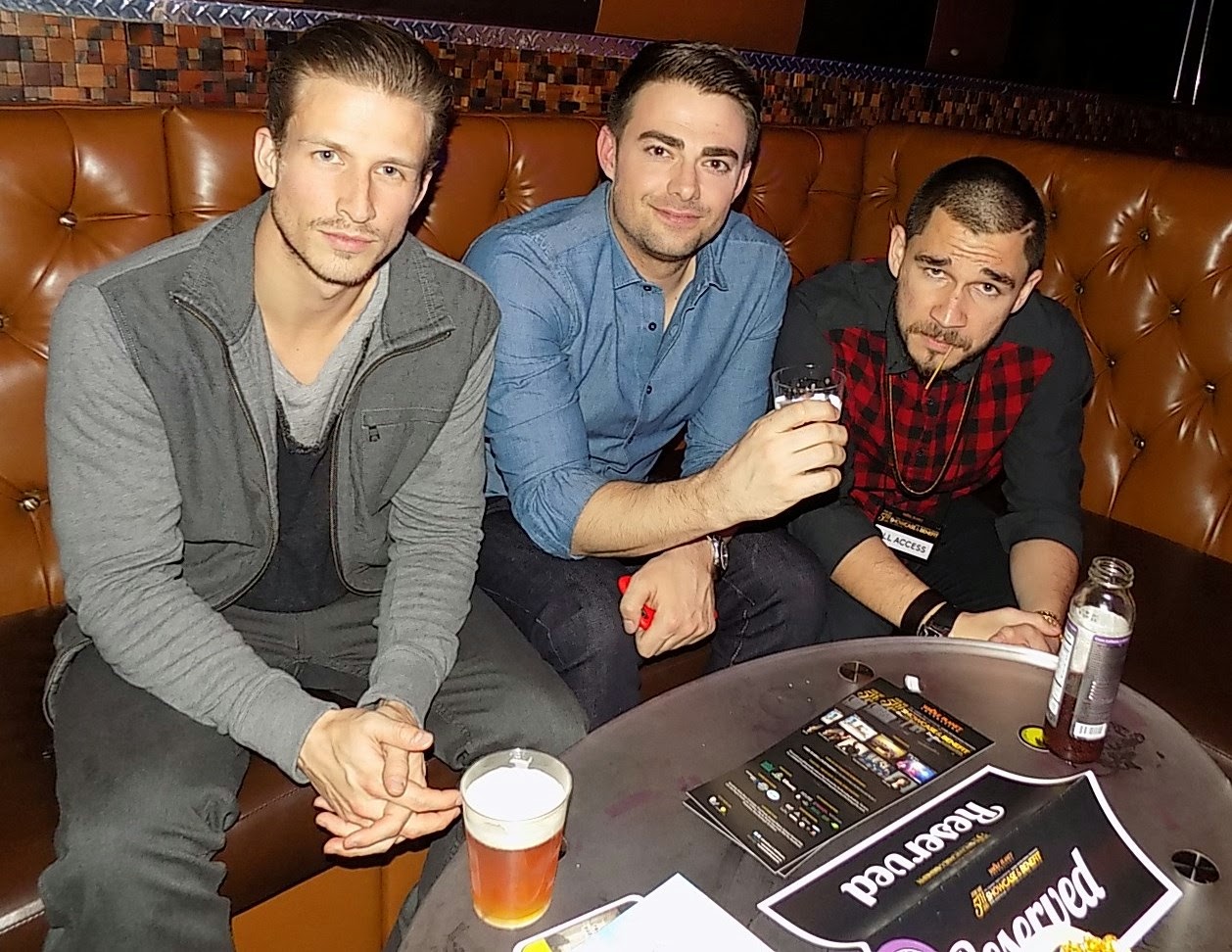 Posted by Karen Ostlund at 5:32 PM No comments:

By Karen Ostlund
The exhibit is a special tribute to honor Hollywood Entertainment Awards Season.
As awards season goes into high gear, The Hollywood Museum is debuting a new exhibit showcasing the Best Motion Picture and Television Award contenders.
Celebrating the 2013 awards season, the exhibit honors the magic of movies and television in a unique showcase featuring costumes and props from the year's most popular and critically acclaimed films and television series.
The exhibit is now open and runs through April 26th at The Hollywood Museum in the Historic Max Factor Building, right across the street from where the Academy Awards® will be held on February 22nd.
The Hollywood Reporter is sponsoring the exhibit. The “Celebration of Entertainment Awards.”  features:
The Dodge Challenger driven by Jake Gyllenhaal in Nightcrawler, the painter’s outfit worn by Amy Adams in Big Eyes, Frances McDormand’s floral mother-of-the-groom dress from Olive Kitteridge, and the red leather jacket worn by Viola Davis in How to Get Away with Murder, are among the many costumes, props and memorabilia on display.
It is spotlighting the magic of movies and television excellence at the height of the awards season.

“Hollywood is the center of the entertainment world, and The Hollywood Museum, located in the heart of Hollywood, has the perfect opportunity to showcase the best of this year’s films and TV shows, paying tribute to the stars, the studios and the contributing Guilds,” said museum Founder and President, Donelle Dadigan.
“There is something for everyone of all ages at The Hollywood Museum. This is where you can discover the glamour of old Hollywood, from Elvis Presley and Marilyn Monroe to costumes and red carpet fashion from today’s awards contenders"

Visitors to the museum will have an opportunity to see curated pieces from Motion Picture award-winners and nominees, including Big Eyes, Boyhood, Dawn of the Planet of the Apes, Foxcatcher, Nightcrawler, The Grand Budapest Hotel and Wild.
Award-winning and popular TV shows on display include Alpha House, Dancing with the Stars, How to Get Away with Murder, House of Lies, Hot in Cleveland, Mad Men, Modern Family, Portlandia, Olive Kitteridge, Ray Donovan, Silicon Valley, The Good Wife, The Newsroom, The Strain, True Blood and The Walking Dead.

A look at red carpet fashion over the years is on display with dresses worn by Marilyn Monroe, Sharon Stone, Cate Blanchett, Lucille Ball and Barbara Stanwyck. Also presented are Judy Garland's costume from A Star Is Born (1954), (Golden Globe®, Best Actress); Oscar®-winner Shirley Temple’s costume from Curly Top (1935) and Oscar®-winner Elizabeth Taylor’s costume worn in Malice in Wonderland (1985), among many others.
Also displayed are Hannibal Lector's mask and props from Silence of the Lambs (1991), (Oscars® for Best Picture, Adapted Screenplay, Director, Actor and Actress).

Curated pieces from motion picture award winners and nominees include Nebraska, Captain Phillips, Her, The Grandmaster, Star Trek Into Darkness, Mandela: Long Walk to Freedom and Fruitvale Station as well as fan favorites Anchorman 2: The Legend Continues, The Conjuring and Ender's Game.
Award winning and popular TV shows on display include Breaking Bad, Boardwalk Empire, Scandal, Homeland, Mad Men, The Newsroom, Nurse Jackie, Modern Family, Grey's Anatomy, Once Upon a Time, and Dancing with the Stars.

"The Hollywood Museum has always been a showcase reflecting Hollywood's history, and this new exhibit is the perfect stage to incorporate pop culture by spotlighting the current Hollywood award season," said museum President and Founder Donelle Dadigan. "It is a tribute to each studio and Guilds that contributed to this year's Oscars®, Golden Globes®, Emmys® and guild and critics' awards."

Karen Ostlund
Karen Ostlund is a former fashion & TV model (Milan, Italy) and the editor and only blogger at WestHollywoodToday.blogspot.com, established 2013. She started as reporter for CorriereBit press-agency in Milan,Italy,(2002-2007), then moved on to become a fashionwriter in March 2007 for Jeffrey Jolson-Colburn (HollywoodToday.net) - former editor of Hollywood Reporter. He passed away in June 2012 with 900.000 readers. Contact: karenfashionwriter@gmail.com